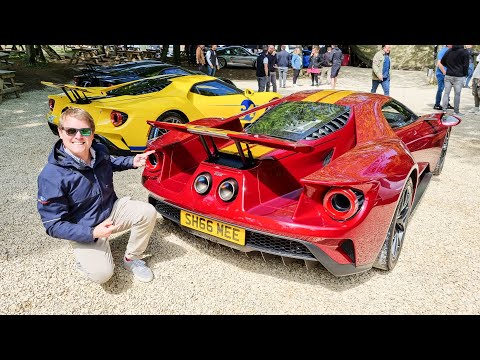 It's Ford GT overload! You've noticed me saying that I've changed the exhaust on my GT, now let's explain why on an outing to join SCD at Caffeine & Machine. It's the first time there's been a gathering of GTs in the UK, and just check out the display of them together!

I've owned the Ford GT for about 3.5 years now and it has 7,000 miles in total; not bad going and one of the highest mileage European cars. However, with more now being delivered through it's time for the first UK gathering of both the new cars, and the earlier generation. In fact, with Supercar Driver hosting activities at Caffeine & Machine, for a few hours we have a reserved area for a total of 15 GTs to arrive and be present together.

After setting off from the garage, with the boot space pretty much entirely taken up by the new Tarmac Works MiniGT Shelby GT500 models that are available now: https://bit.ly/3rO3gm0 It's a few hours on the road after a very early start to venture onwards to the event to join many-a Ford GT.

However, en route to the venue, let's talk about my Ford GT's exhaust, and why I've changed it. Technically speaking, exhausts are consumable parts and often will eventually need replacing from their original parts. Unfortunately there was an issue with the system I fitted to my car during the US tour, and as such needed to replace it with a new European system. While it is visually the same; again an Akrapovic Titanium Sports exhaust, it is now the Euro spec and therefore much, much quieter than the US equivalent.

At C&M, one is then one of 15 total Ford GTs; 8 of the new generation and 7 of the 04/05/06 era cars. Not only that though, plenty of other great cars are in attendance for SCD's gatherings over the weekend.

Make sure to check out the Tarmac Works MiniGT GT500 models that are available now: https://bit.ly/3rO3gm0