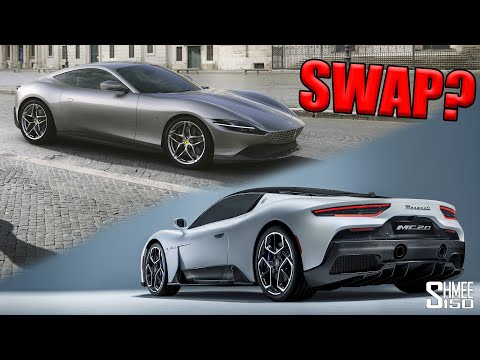 The Maserati MC20 could have been a Ferrari or an Alfa Romeo, and don't you think there's a disturbing similarity between the Ferrari Roma and the Maserati Alfieri concept that was launched?! Join me for a Fuel For Thought to have a think about the swap of cars between the Italian manufacturers, you might be surprised!

After 15 years since they last made a supercar, Maserati are back with the brand new MC20! Standing for Maserati Corse, and the launch year of 2020 it makes a new chapter for the Italians with the car that features the 3.0l TT V6 Nettuno engine with F1 technology, and a carbon tub and bodywork.

However, some speculation can reveal some interesting thoughts from behind the scenes. In recent years we've been hearing rumours from both the Alfa Romeo camp of an upcoming 6C or 8C; a mid-engine supercar based around a carbon tub and sharing a variant of the 2.9l TT V6 in the Giulia Quadrifoglio, a car heavily created by ex-Ferrari engineers. Simultaneously, there has also been talk that Maranello might be working on a 'Dino', likewise a mid-engine supercar that seats beneath the 458/488/F8 line, a rumour that's been long standing.

At the same time, let's take a look at the Maserati Alfieri concept that launched back in 2014, and consider it against the new Ferrari Roma that arrived at the end of 2019. The similarities are heavy, from the overall proportions and shape of the arches, to the shark nose, rear window and body lines. This can be no coincidence!

What do you think, have Ferrari and Maserati effectively swapped the Alfieri and Dino to respectively become the Roma and MC20? Where do Alfa Romeo sit inside this? What do you think of the new MC20 as well?