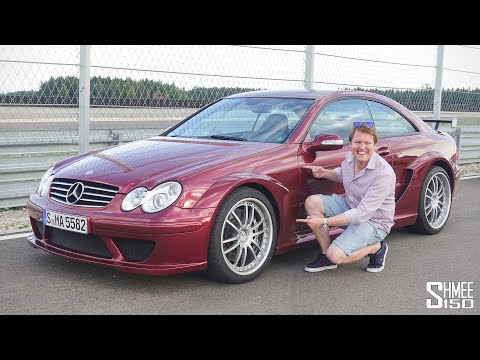 The CLK DTM is one of the rarest and most unknown Mercedes-Benz cars ever! Only 100 units of the Coupe were ever made, a car that celebrated the domination of the team in the DTM championship. While to many it's a 'secret' and largely unknown, to drive it's something really special, as I've been lucky enough to do at the Mercedes-Benz Museum Dream Cars event!

After immense successes in the DTM championships, following the 2003 win, the team at Mercedes went about creating a road variant to be put into desperately limited production. Only 100 Coupes and then 80 Convertibles were ever made, and of those only a handful were painted in the stunning deep red paintwork of this example retained by the Mercedes-Benz Museum having served duty back at the time on the press fleet. Bernd Schneider, 5 times DTM champion, played a significant part in the development of the car, along with the SLS AMG Black Series and more.

The exterior stands out thanks to the wide and aggressive arches over the normal CLK body shape, while the interior strips everything away leaving full carbon door cards and a rear bench of sheet carbon behind the support brace. Originally the car cost €236,000 and all were sold prior to reveal, but finding one on the current market is both very difficult and of course carries a hefty price tag.

Thanks to Mercedes-Benz Museum for the epic Dream Cars event experience, driving many incredible cars including the CLK DTM, SLS Black Series, AMG GT R and many from the Classic collection. http://instagram.com/mercedesbenzmuseum