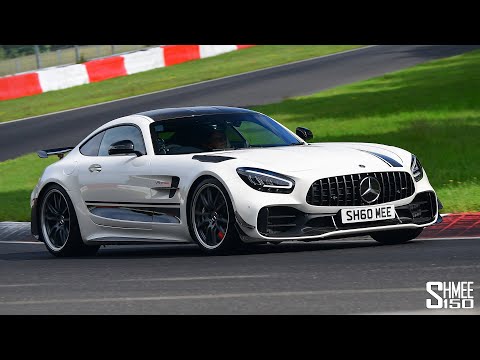 My AMG GT R Pro finally on the Nürburgring Nordschleife! After having the beast delivered to Germany, and now completing the running in process, some laps of the Green Hell are an absolute must to see what it's made of. Safe to say, any doubts or questions about the Pro have now been answered - what an epic machine!

Having recently made my maiden laps of the Green Hell in the SLS AMG Black Series only a few weeks before, it's time now to bring the next of the Shmeemobiles for a first outing around the famous tarmac. After the GT R Pro was delivered to Germany a few days before, I've now put on some miles and completed the running in process which means it can start to be unleashed and driven in anger - something long overdue.

The AMG GT R Pro is an even-more focused version of the GT R, and especially honed in for driving on this specific road - the Nurburgring being a public toll-road during Touristenfahrten (Tourist Drives). The suspension is improved, aero increased, and features a roll cage as standard, so it was inevitable I would bring it here at some point in time.

Originally the car had been collected in December with the intention of saving the main usage until the spring and trackdays around Europe including the Nurburgring, Nordschleife, Zandvoort, Portimao and Ascari, although the global crisis had other ideas so it has sat rather unloved up until this point in time. It's time now to change that with some outings at the Nurburgring and more to follow.

There's no question, this car suits the Nurburgring very well, it offers incredible levels of grip and confidence, riding the bumpy surface with remarkable smoothness and effortless performance. Perhaps most impressively is how welcoming the car is to being driven in anger, and significantly faster (albeit less dramatically) than the SLS Black Series.

Special thanks to Stateside Supercars for the exterior shots of my laps!
https://www.youtube.com/channel/UCUnKWj_hyiVErnVSf2oD42A