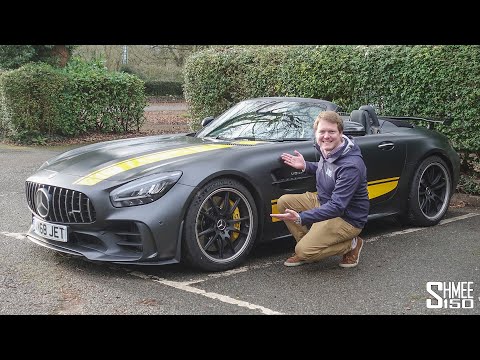 I'm a big fan of the AMG GT R so as well as my newly delivery GT R Pro, I'm also buying the GT R Roadster! To find out more about it and take you through the experience, reason for both cars, and the spec I'm choosing; let's catch up with my friend @rana65556 to go for a first drive in his JET!

I owned my GT R Coupe for 2 years and drive it almost 20,000 miles, becoming a huge fan of the format and style of car. Naturally when the GT R Pro was announced I was instantly keen to update to the newer version and hence took delivery of that car a month ago. The Pro is more aggressive with the aero and dynamic setup, but also has all the facelift changes including lights, digital dashboard and interior controls. However, the Roadster had also been announced, and it's right up my street, creating a bit of a predicament!

Sometimes when you like something, it might not make sense but you want to go with what you feel and this is one of those times. The Roadster retains a lot more of the playful character of the regular GT R, which the Pro lost given its track focused nature. It also has the bonus of the roof down driving experience with the grumbly V8 and that same grand touring style feel. As such, and with the announcement of a Black Series due in the future that I'd rather like to add to the garage, it seems like going for both the Pro and Roadster at the moment is the way to go. Even from a collection point of view, both are rare cars and 1-of-750 units in total each.

On to the specification then; like with the GT R Pro the hands are significantly tied as to what spec is allowed with all UK cars sharing a spec bar the exterior body colour and the option to upgrade to carbon ceramics. For that, I have chosen Hyacinth Red with the black RXC wheels and yellow brake calipers.

However, when it comes to the interior this is where it gets interesting. There are not many cars that have a front-mid mounted engine, with a two-seat convertible configuration and a wing on the back; add the criteria of bucket seats and it's a very small list - and there's something infinitely cool about that! As such, I am having the interior done via the AMG Performance Studio to change it to Dinamica and Leather with yellow stitching (to match the calipers), adding a set of bucket seats, and introducing yellow seatbelts and stitching to go with it. Hopefully this all turns out how I'd like it to be but I think it should work! There will of course be technical questions around the heated seats and Airscarf which obviously don't function with bucket seats but that doesn't matter in the slightest.

To have a first go behind the wheel, let's meet up with @Rana65556 and his designo Graphite Grey Magno car with aftermarket yellow stripes, to feel the differences in person and take it for a drive.

You can find Rana's pages and follow his JETs here:
http://instagram.com/rana65556
https://www.youtube.com/channel/UCp-9bXXenOe3BiS4pmTQ4Og