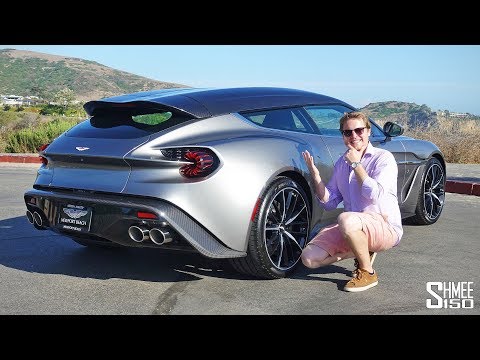 The Aston Martin Vanquish Zagato Shooting Brake is quite possibly the ultimate 'wagon' and when it was launched I considered buying one, but did I miss out by not doing so? Join me at Aston Martin Newport Beach to discover the unusual estate car and explain a little more.

The Shooting Brake came in as the 4th variation on the Zagato Vanquish platform following the Coupe, Volante and Speedster, and the time it was shown to prospective customers I owned both my Vanquish Volante and Ferrari FF, hence prompting some consideration to making the purchase as the ultimate support car to the soon inbound McLaren Senna and Ford GT. However, with the values of the latter two, it was impossible for me to justify the addition of a car as expensive as this as well as the others.

To the present day then, under beautifully sunny skis in the OC, California, and car #15 out of the 99 Vanquish Zagato Shooting Brakes. Let's take a good look around the car including the electrochromic roof, V12 in the engine bay, and the unusual rear luggage compartment. Then it's time to head out onto the roads to soak up some of the exhaust sound and get a feel for the car in all its glory.

A big thanks goes to Aston Martin Newport Beach for the opportunity, the number 1 Aston Martin dealer in the USA. If you're curious to see more of the unusual cars available and as they arrive, do give a follow at:
http://instagram.com/astonmartinnewportbeach